Radiation is something that surrounds us every day. It can be both harmful and useful for us. Moreover, it can even be perceived by insensible degrees by our organisms. Radiation is transferring of energy in the form of high-speed particles or rays through matter and space. To put it simpler, radiation is energy evolving from a source. This energy can travel through space and get inside of different materials.

April 26th 1986 became a tragic date and when it is resounded, it stirs blood of not Ukrainians only, but of the whole world as well. A nuclear accident occurred on this day at the number 4 reactor in the Chernobyl Nuclear Powerplant situated not far from the city of Prypiat (located in the north of the Ukrainian SSR). The accident happened when a safety test on an RBMK-type nuclear reactor was conducted.  The issue had an explosion character and the reactor was completely destroyed. This resulted in a huge emission of radioactive material into the surrounding environment. Radiation cloud from Chernobyl moved to the boarding countries and to the farther parts of Europe. The circuit of the world learned about the tragedy.

The catastrophe at Chernobyl Atomic Power Station brought a lot of sorrow and consequences that influenced our world. The clouds of radiation lift up and spread with the airflow all over around. In such a way, not only Ukraine, Russia and Belorussia were rayed with radioactive particles, but Austria, Switzerland, Bulgaria, Finland, Sweden and other lands were in danger too. Another crucial thing is that the tragedy was not announced by the Soviet government properly at first and people around continued living their usual lives being unsuspicious of radioactive Chernobyl disaster. Meanwhile the firemen who fought with the disaster had only canvas clothes, helmets and mittens in their armoury. Gas masks were impossible to use for them due to the high temperature there.  This situation was extremely dangerous as radiation of Chernobyl featured an extremely high level.

The situation did not allow determining Chernobyl radiation level during the emission. One of the two instruments for calculation broke down at 1000 R/hr and the second one appeared to be inaccessible due to obstructions. That is why the levels of radiation from Chernobyl were calculated later on.

People who were struggling with the catastrophe were not protected in a correct way because the real Chernobyl radiation level and its menace were not possible to determine at first. Later on radiation was called an “invisible enemy” and this is such a truthful description.

The reactor’s explosion and fires released from 5% to 30% of the radioactive reactor core at minimum. All this went to the environment. Poisonous radioactive particles deposited in various European countries.

How much radiation was at Chernobyl? Chernobyl radiation exposure for the neighbouring areas was 90 times higher than the exposure during the atomic bombing in Hirosima.

Counters showed 500 roentgens per hour after 14 hours of the tragedy. However, radiological safety officers came to the conclusion that the level of radiation background equalled to 1500 roentgen per hour. Such difference is possible because the counters that were used at that time were not rated at such a high radiation level.

The most frequent question is: how much radiation did Chernobyl release? Nobody knows for sure. Here are the approximate radiation levels in Chernobyl after the explosion (measured in sieverts per hour (SI Unit)).

After more than 30 years of the tragedy have passed (and certain radioactive particles are known to have half-life of 30 years), we can take a look at the alterations in the radiation level in Chernobyl. Radioactive background in Ukraine has stabilized and lessens. The 30 km exclusion zone located around the nuclear power station in discussion is not that dangerous anymore. However, the 10 km exclusion area is still dangerously contaminated.

And the next infographic displays levels of radiation in Chernobyl that changed with years (measured in uSv/hour).

As it is clearly seen, the level of radiation in Chernobyl has significantly dropped with years. This place can be visited safely by organized tourist groups. However, it is crucial to observe all the rules and recommendations. 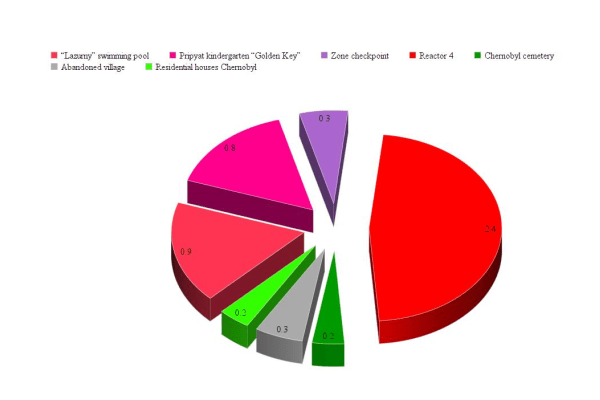 Type of Radiation at Chernobyl

Human-beings are exposed to various types of radiation. It may be a surprise, but we receive radiation even from space! Human’s body geared to adjust to certain radiation levels. Thus, getting acquainted with the Zone together with a trained guide is safe.

There was a large emission of radioactive parts into the environment as a consequence of the explosion in Chernobyl. There were:

It is necessary to stress that the quantity of the radioactive parts that survived halves in the currency of one half-life period. And with each half-life period there are less and less of them.

There are four Chernobyl radiation types.

This is the most spread type of radiation at Chernobyl. It can be easily stopped (for example, by several centimetres of air or even by a sheet of paper). Nevertheless, in case such radioactive material leaks into an organism and interacts with the inner organs it will harm the organism. That is why it is crucial not to eat anything in and from the exclusion zone.

Beta Chernobyl type of radiation can be stopped relatively easily by several metres of air, a piece of foil or a piece of plastic. It also does not expose to risk human’s body unless a person eats something contaminated.

This is an electromagnetic radiation (similar to radio waves or visual light, but more active). It features effective penetration and the best materials for stopping it are plumbum and concrete used in a heavy layer. Gamma radiation is everywhere, so human organism has adapted to small quantities of it. Mild exposure does not provide any serious risk for health.

This radiation kind features a high level of penetration. Materials with high neutron content can stop it (for example, a lot of water or paraffin). This is a very rare type of radiation that can be met only near the active nuclear reactor.

Map of Radiation from Chernobyl

Radiation spread onto different European countries due to the weather conditions. It goes without saying, that Ukraine, Belorussia and part of Russia suffered the most severe and the largest acquisition. The highest stage was in Chernobyl, thus it was divided into 3 exclusion zones:

The total map of Chernobyl radiation exclusion zone spreads on 2598 km² including some of Kyiv and Zhytomyr districts. There were around 10 big towns located amidmost the tragedy that have been evacuated forever as a consequence of the radiation level. However, the list of towns left by their inhabitants is much bigger.

The time has passed and the situation has changed. Here is the map of radiation spread displaying the situation after the 30 years of the tragedy in Ukraine, the country where everything happened. 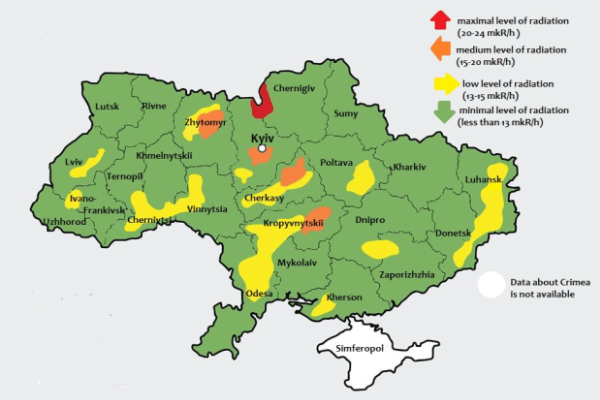 Effects of Chernobyl radiation have been thoroughly studied. Firstly, let us have a look at fauna and flora forms in Chernobyl.

A lot of animals that had contact with contaminated parts died shortly after the poisonous explosion. However, if to look at Chernobyl and its surroundings, it is possible to see that there are a lot of animals living there. They inhabited areas left by people when the radiation background lowered.

Scientists placed around 40 motion-sensitive cameras back in 2014 to observe the wild life and found hogs, bears, lynxes, wolves, horses, foxes and lots of other species living there. Their organisms brought themselves in sync with radiation levels which lowered down now.

Forestlands also suffered from the disaster. ‘Red Forest’ as it is called now changed the colour of its pine needles to red in 30 minutes after the tragedy. Nevertheless, it was determined that plants received less severe damage from Chernobyl radiation effects. Plants began to grow after 1 year of the fatality and after 5 years, the radiation terminated being deathful for many kinds of life.

Speaking about effects of radiation in Chernobyl on us, the human beings, the most common question is: what does radiation do to your body?  Obviously, the most terrible radiation effects were obtained by the liquidators of the accident. Bigger part of these people died shortly. High radiation doze leads to the next health concerns.

Radiation burns from Chernobyl looked like usual sunburns. They appeared on skin after several minutes or several hours of exposure. The most terrible thing about it that since the bone marrow does not die, the person can seem to get better for several days. However, then the situation gets worse and the person ends up with sepsis.

The sickness affects the medulla and the digestive tract. The symptoms (such as vomiting and diarrhoea) were seen after several hours of radiation exposure in Chernobyl. Human body cannot overcome the sickness because bone marrow cannot make white blood cells anymore and they are fighting with infections). Week immune system leads to blood poisoning and sepsis.

Radiation at Chernobyl caused different mutations. Certain animals, plants and mushrooms suffered disproportional effects in comparison to common species and some birds suffered partial albinism. However, serious mutations could be seen only right after the disaster. Other information states that radiation mutation from Chernobyl leads to changes in cells that lead to cancer.

It was informed that there were two Chernobyl radiation victims who died during the explosion. The other data differs from source to source, but around 50 people died in the result of the breakdown and around four thousand people died from the consequent radiation effects on health. The United Nations Scientific Committee searched for the first responders that received diagnose ‘acute radiation syndrome’. There were 134 of them. 28 of these people died in 4 months after the tragedy. However, the others lived a long life after the calamity. Chernobyl radiation deaths should not be forgotten.

With the lapse of time and half-life of the radioactive elements Chernobyl returned to life. Wild life around the area is various. Obviously, the area is not valid for people to live there yet, but short-term staying there is not dangerous. It can be compared to staying in any big city like NYC or London.

Visiting Chernobyl zone is not that dangerous nowadays. Having one-day visit of Chernobyl zone will turn to you from 0.003 to 0.005 mSv. This can be equalled to natural radiation background. And here are some facts in mSv proving this:

More useful material can be found via this link – https://chernobyl-visit.com/chernobyl-diaries/is-it-safe-to-visit-chernobyl-in-2020/

Extreme tours to Chernobyl attract a lot of tourists year over year. The number of those wishing to...
More